My Worm Formulas meet the National Organic Standards for use for animals.

The NOFA-NY Certified Organic LLC has determined that both my Worm Formulas meet the National Organic Standards for use for animal health. My formulas have passed certification in CA (CCOF).
My formulas have also been approved for organic use in Canada by the Canadian Organic Regime (COR).
One Pound Bag
Packaged by weight not volume; One pound contains approximately 75 Tablespoons.
Ingredients: Garlic, Cucurbita Pepo, Mugwort, Fennel, Hyssop, Thyme

Select a row below to filter reviews.

View All Reviews - Reset
I love this product!
We have been raising goats and sheep for 5 years now. These herbs along with rotational grazing and good management have kept my goats and sheep off of chemical workers for the last 4 years. Thank you.
Reviewed by: Marjorie Sabino from KY on 8/16/2021
5
Excellent results!
I rescued some pygmy goats from incredibly unsanitary conditions. Thankfully my vet has trained me to quarantine. They tested positive for coccidiosis along with every worm known to man. Because 2 of them were in serious condition, I did choose to attack the problem initially with chemical pharmaceuticals. And I've followed up with Molly's Herbals. Using the dosing balls, makes it incredibly easy - they luv them and now I'm giving the products to my pigs, horse, alpacas and my dogs. Everyone's coat has become shinier especially the dogs. I've really noticed a difference. And I'm so grateful that I don't have to use those horrible poisons with my animals. I much prefer the natural approach. And how cool... simply make their bodies inhospitable to worms and parasites... sounds like a sensible approach to me. I see the results every day in my pasture with healthy shiny animals. Thank you so much for your terrific products. Very grateful.
Reviewed by: ruth fruehauf from CA on 7/27/2020
5
AMAZING!
How often do you hear the words NEGATIVE worm load from your vet?? I was so excited! I have been using Worm Formula #2 in conjunction with another herbal since last April and had all three of my goats tested for the first time last week. We were both so surprised that they had no worms at all! (Especially considering I haven't been as faithful to administering their herbs as I should.) I am very happy with this product and will DEFINITELY continue using it! 5 stars all the way!!
Reviewed by: Monica Buffington from OK on 3/6/2019
5
Herbal wormers
All I can say is this product is 100% effective and the quality is superb!!! My goats have never been healthier!!! I have now been giving it to my ducks, chickens and dogs and they all have shiny coats & feathers and loads of energy!! Soo grateful for your hard work Molly, thank you for all that you do.
Reviewed by: Claudia Annett from Canada on 2/24/2019
5
Have used for years
When used regularly, this product works to keep manure normal. I've used Molly's products for years and have never been disappointed.
Reviewed by: Joy Miracle from KY on 7/17/2017
5
Load More
Click here to download the printable PDF Sheet 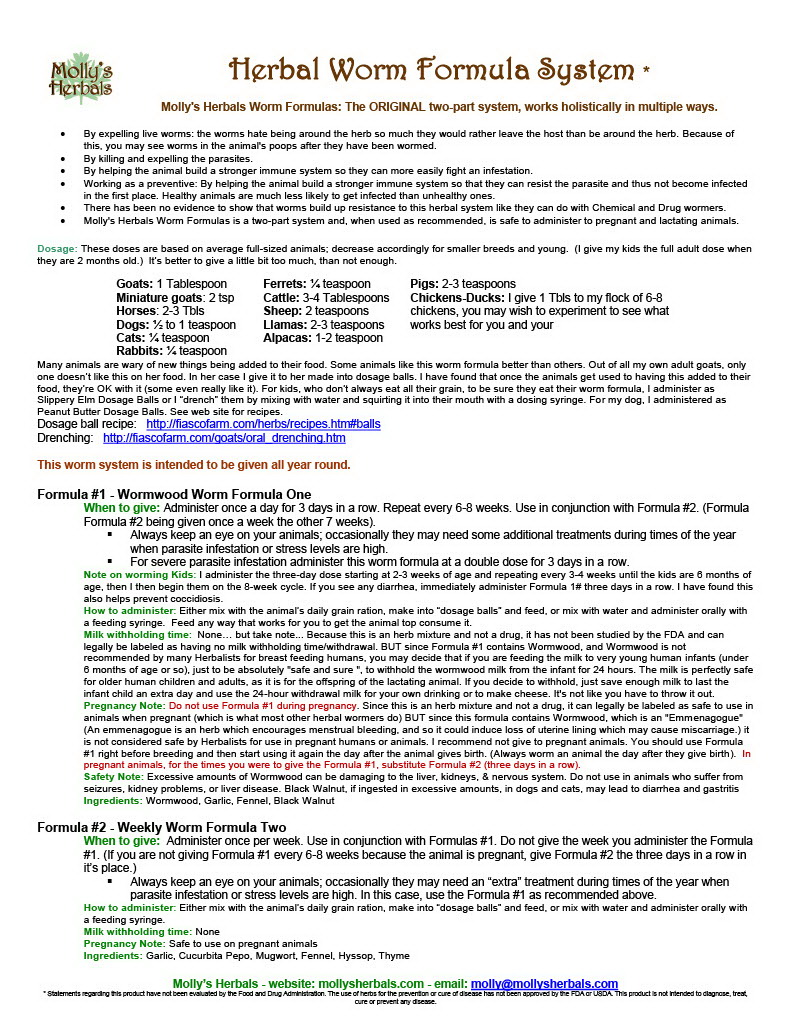 Here is the Cycle Simplified:

The adult cycle is as follows:


While pregnant, substitute F#2 for F#1
The day after giving birth, give F#1 three days in a row no matter where in the cycle you are.

The Youngster cycle is as follows:
Starting at 2-3 weeks of age
Decrease the dose based on size.
For example, for standard breed goats, start with 1/2 tsp (1/6th the adult dose) and increase as they grow.

Goat People: Please read the information I have written up here:
Coccidiosis prevention and treatment:
https://www.fiascofarm.com/goats/coccidiosis.htm

Please keep in mind that everybody is a different, so different things work for different animals.  The main thing is getting animal in ingest the herbs, and it really doesn't matter how you end up doing it.

Getting the herbs into the animal can be easy, or it can be difficult at first.  I have developed my herb formulas to taste as good as I can, but still, sometimes animals and be weary of new things.  Be patient, eventually your animal will probably love the herbs and lick their bowls clean.

First you can just try sprinkling a small amount it on their grain/food. Try just a small amount at a time to let them get used to it and work up to a full dose.

If you don't feed individually, making the herbs a treat is a good idea.

1/2 cup (8 Tablespoons) Worm Formula
1/4 cup (4 Tablespoons) powdered Slippery Elm Bark (Slippery elm acts as a binding agent to hold the herb mixture together (it also tastes good). When I developed this recipe Slippery Elm was not as expensive as it is now. While I still think it is the best "binder" you can try other types of flour such as flax, almond or hemp, or even omit the flour all together.  Whatever works for you).  *See after this recipe for more substitutes for Slippery Elm.
Add:
1/4 cup Honey or Molasses

With your fingers (or in a food processor), mix and kneed into a dough. Break into 16 even pieces, shape into balls and then roll the balls in a little bit of Slippery Elm powder just to coat. Each ball equals a 1/2 Tablespoon dose. Offer an herbal dosage ball to the animal first, and he may eat it right out of your hand. If he won't, shove it in his mouth. Often, the animal realizes the balls taste good and want more. If he spits it out, just shove further back in the mouth next time. (For goat kids, or other smaller animals, I break the balls into smaller pieces to administer.)

Herbal Dosage Balls For Dogs (works for other animals as well)
Mix together:

With your fingers, mix and kneed into a dough. Break into 12 even pieces, shape into balls and then roll the balls in a little bit of whole wheat flour just to coat. Each ball equals a 1 tsp. dose. Offer an herbal dosage ball to the dog first, and he may eat it right out of your hand. If he won't, shove it in his mouth. Often, the dog realizes the balls taste good and want more. If he spits it out, just shove further back in the mouth next time.

Other hints for getting animals to eat the herbs:

And finally, if you have chickens, I usually just dump any drench I have left over from drenching my kids onto their scratch grain.  You can also moisten their scratch grain in some manner to the herbs will stick to it and sprinkle it on their grain.  A customer told me her chickens often will eat a gruel of brown rice flour and wormer mixed with scratch grain.

Molly's Herbals Worm Formula Dietary Supplement * Questions & Answers
The following are some questions I am asked regarding my Worm Formula and my answerers to them from my personal experience using my Worm Formula. Please make sure to read the disclaimer at the bottom of this page.
Q&A:
I have miniature goats/horses, what dose should I use?

The dose for Miniature breeds is 2/3 the regular breed dose.
For example:   Tbls = 3 tsp, so the dose for miniature breeds adult goats is 2 tsp.
I use the full adult goat dose on our goat kids over two months old (when they reach about 30-40 pounds; an adult reaches 125 - 200 pounds).  Unlike drugs, it is really hard to give too much of these herbal formulas. I have given up to 5X the suggested dose to my goats with no ill effects. I suggest starting with a 2/3 dose to full dose for adult miniatures and go from there.  Trust your instincts as to what you feel is best for your own animals.

Do the Formulas work against Heartworm?

I have not studied it for heartworm.  I have had positive feedback in regards to it from customers, but I cannot say for sure.

Is this effective for lungworm?

Since herbal wormers work, in part, by expelling parasites from the digestive system, I do not rely on my herbals to take care of lungworms already established in the lung. I am not totally sure the herbals will reach the parasites in the lungs.  It may help, but I have not had the opportunity to study this in my own herd, so I cannot say for sure. I do know that it seems to keep lungworms from reestablishing in the lungs (it has for my herd). If you have a goat with established lungworms in their lungs (they cough after running) I usually recommend treating the infected goat with Ivomec (a chemical wormer) one time and starting on my Worm Formula. (I have not been able to study if my Worm Formula takes care of established lungworm because my goats (all on my herbals) never get lungworm anymore

Can I give the Formula to my rabbits?

Yes, I do know of some people using the formula on rabbits with good results.  I believe the starting dose to try is the cat dose.  Some people make up dosage balls using rolled oats, which rabbits seem to really like.

Can I give the Formula to my ferrets?

Yes, I do know of some people using the formula on ferrets.  I do not know the dose they use.

Can humans take these Formulas?

I have eaten my fair share of these Formulas.  I would not give any of my herbal formulas or tinctures to an animal if I was not willing to try it myself. Also, I need to taste my formulas so that I can make the Formulas taste better so they will be easier to administer to animals.  Formula 1# is extremely bitter and I can not say it tastes good by any means, but my goats seem to love it.
I use My Worm Formula as an herbal dietary supplement on the same schedule as our goat herd. The human dose I use is 1 Tbs.
I do know of other humans using my Worm Formula as an herbal dietary supplement.  The common starting serving suggestion is 1 Tbs.. Be aware that my formulas are not considered food, and are not drugs; they are herbal dietary supplements and so are not tested or regulated by the FDA.

Worm Formula #1 has Black Walnut in it.... is it safe for horses?

It is fine for all animals, including horses.
The part of the Black Walnut that contains the substance that can be toxic to horses is the roots and wood.  That is why you hear about not using it for bedding for horses.  The leaves contain a little of this, but it disperses very quickly when the herb is dried and ground.  I use the hulls, which do not contain the toxic substance.  I have never gotten any negative feedback with people using my formulas for horses.

I have another wormwood based herbal wormer and want to switch over to yours, can I substitute this other wormer for your Formula 1# until I use it up?

Have you seem any resistance developing to your Worm Formula?

No, I have not; my herd has never been healthier.